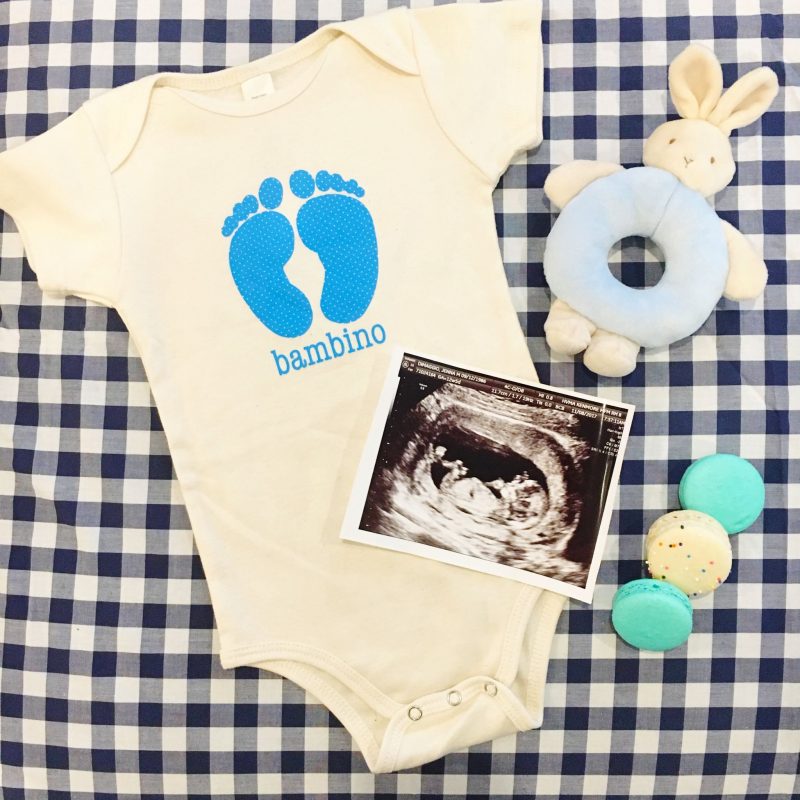 If you couldn’t tell by the picture…Baby D is a BOY!

So excited to share that update and a bit more baby stuff today, like how we found out Baby D’s gender and also how we shared the news with our families.

For a little bit after we found out we were expecting, MJD and I debated whether or not we should find out the gender. The debate wasn’t very long lived because I think by our first doctor’s appointment we had decided we wanted to know. We are just both big time planners!  We planned to find out during the anatomy scan which takes place at an ultrasound between 18-20 weeks or so. There is an option to find out earlier with blood work, but we were fine with waiting and building a little more excitement too.

Leading up to the ultrasound, I really didn’t have any feeling either way.  But the night before I had a dream that we were at the appointment and it was a boy. I woke up, told M and off we went to our appointment. A few hours later and the ultrasound technician was verifying my dream- our little boy was growing along perfectly!

Before the ultrasound we had decided that we wanted to keep it a secret for a few weeks so we could tell our parents in person. My parents live in New Jersey and when I told them I was pregnant, we had to do it over FaceTime. I really wanted to have the chance to tell them about the baby’s gender in person- especially since it is the first grandchild on that side. Waiting to tell in person had us having to keep the secret a few extra weeks and poor MJD was bursting at the seams to tell everyone I think!

As for telling our families, I wanted it to be simple, but special- not a huge deal gender reveal. So many people asked if I was going to do a big gender reveal “for the blog”, but I think each couple should do what feels most special to them to celebrate. For us that was having our two sets of parents over for dinner to share the news, what we started calling the “little gender reveal”. I planned out a nice dinner menu and a few little surprises to celebrate our son (still not over/used to saying that 🙂 ).

To tell our parents, I wrapped up the adorable Bambino onesie in a gender neutral box and had our two moms open it together. There was so much excitement as they saw those little blue feet! A few people didn’t even notice the bambino saying on the onesie with all the celebrating, but I had picked that out as a nod to both of our Italian families. I had seen the onesie weeks before at the SoWa market at Gwen from Simply Chickie‘s booth. I was just barely pregnant but loved it so much I saved her card, just in case we had a boy. Well we did and I ordered it right after we found out. Besides getting the onesie, I had to have some sort of sweet treat and picked up some of our fave macarons from Miam Miam Macaronerie in blue, green and white. Super yummy and super cute!

Our little gender reveal was such a special night that I know I’ll remember forever. I’m now 23 weeks along and more than halfway there to meeting our little guy- we can’t wait to meet him!