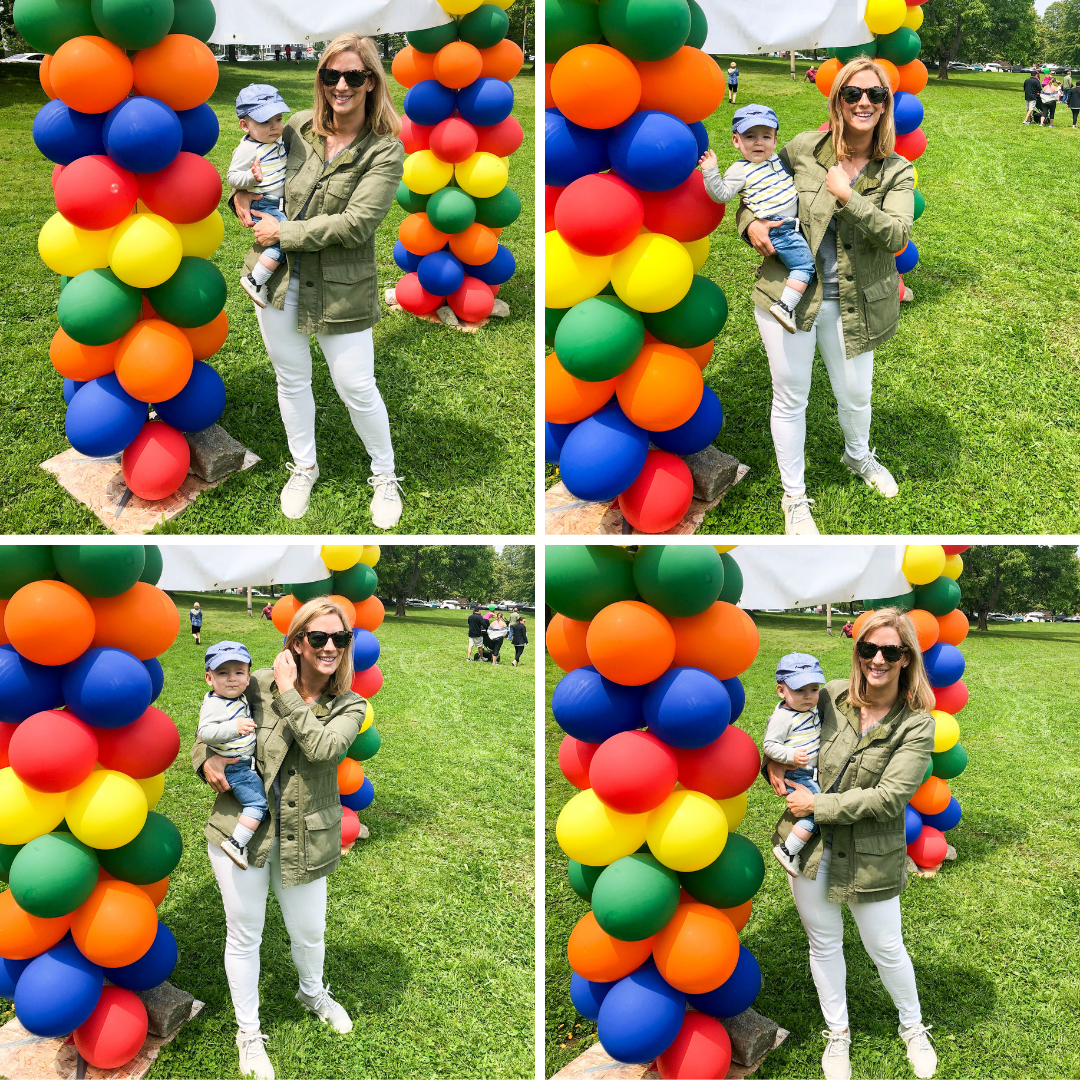 Over the weekend, I posted a picture on my Instagram story that I was trying out an egg free, nut free muffin recipe for Nicholas. I got a ton of responses asking if he was allergic. I guess I didn’t realize I hadn’t really mentioned it before but I thought I’d write down a little bit about our experience so far of having a baby with allergies (nuts and egg). This post is going to be a bit different from others and will just be sharing our personal story for anyone who is interested. I am also planning to share some allergy friendly recipes in the coming weeks and hopefully this post will provide some context for why I am doing that 🙂

At Nicholas’ six month doctor’s appointment, we got the go ahead from our doctor to start introducing peanut butter. In keeping with the trying a new food three times, I gave him his first taste of peanut butter on a Friday afternoon while our nanny was at home too. I remember planning to do it when I had “backup” in case of an emergency 🙂 For the first taste, I just had him lick a little bit of peanut butter off one of my (clean!) fingers. He seemed to love it, but did seem like he was trying to figure out the texture as he was only having purees and oatmeal at that point. I kept waiting for a reaction and was super relieved when there didn’t seem to be one.

The next morning I fed Nicholas his oatmeal and once again gave him a few licks of peanut butter. Within about five minutes, his lip looked swollen to me and so did one of his eyes. He wasn’t completely swollen like Will Smith in Hitch or anything, but MJD and I both knew he looked “off”. I called our doctor’s office and after telling them he was swelling, they started asking questions- was his tongue swollen, was he having trouble breathing? I got really scared when they suggested that we actually transport him via an ambulance. I honestly wasn’t thinking of it as that serious until they said that and then I began to panic. We made what could have been a dumb decision, but actually ended up being fine, and drove to the hospital ourselves. I was sitting next to Nicholas listening to his every breath to make sure it didn’t sound like his airways were constricting. I remember yelling at M to slow down driving, but I know it was just because he was nervous too. We were seen almost immediately after arriving at Children’s Hospital where they started monitoring Nicholas. His oxygen levels and breathing were fine- he just didn’t like staying connected to the monitor on his foot ;)- so at least that fear went away. After some medicine and most of the day in the hospital to make sure he didn’t have a delayed reaction, his swelling had gone down and we were on our way home.

From that moment, our doctor’s guidance was to act as if he was allergic to nuts until we got to do a blood and skin test. She also let me know that kids often have a reaction the second or third time they try a food- I had no idea and definitely thought we were in the clear after he had it the first time. A few weeks later we went in for a blood test where he was tested for allergies to peanuts, tree nuts, milk and soy. Back tracking a little bit- a few months before this reaction, Nicholas was having bad reflux, had eczema all over his body and some abnormal diapers which the doctor thought may have been due to a Milk Protein Sensitivity. Because I was nursing him, I cut out dairy and soy from my diet. While it definitely seemed to help with his reflux and digestion issues, his eczema was persistent and would flare up frequently without us really being able to pinpoint it. So when we got the blood drawn, I definitely wanted him tested for that too. His bloodwork came back showing he was allergic to peanuts and tree nuts-but not milk and soy!- so from there we scheduled an appointment with an allergist for skin test.

At this point, we got rid of all nuts in our house too and I cut them out of my diet. Nicholas’ eczema does flare up from time to time, but for the most part his skin is so much better and clearer. I truly believe it was from getting nuts out of our house and out of my system. Our doctor didn’t think there was any medical data that it is passed through breast milk, but I definitely saw a HUGE difference in doing that. I was beating myself up a bit because I know I definitely ate RX bars or Lara bars with nuts literally while I was nursing him! I felt awful if I had been causing that, of course you would never know until later, so I try not to think about that.

I’m sure you know what a skin test for allergies involves, but they basically prick your skin with the oils of an item and see if a hive develops to determine allergy. For Nicholas’ testing they tested a whole bunch of nuts, egg, milk, soy and dogs. After they poked him, they told me he had to sit up and I had to avoid touching his back for 15 minutes. They left us alone in the exam room and within a minute, his back was completed covered in hives from where they had pricked him. So it was pretty obvious to me that they were going to tell me he had quite a few allergies when they came back in. The doctor confirmed he was allergic to nuts, eggs and dogs and showed me how to use an Epi-Pen. They started explaining about how egg allergy can have different components and some people can be allergic to scrambled egg, but not baked eggs. So they wanted to do another blood test to test for the different type of egg allergy. I had no idea this was even possible!

The test for the different egg components came back a few days later and Nicholas’ level for baked egg was considered “borderline” so we’ve been avoiding all egg including in baked goods. I was pretty upset when we first found this out and really lamenting what if he can never eat cake at a birthday party, he can’t eat cake on his first birthday and spiraling on and on. We’ve been seeing an allergist and doing all his testing at Boston Children’s Hospital and being there helped put things in perspective for me. Walking through there you see many kids that are SO sick. And if all we have to deal with is a few allergies, it made me re-frame my thinking and think about how lucky we are. And he barely ate his egg free, nut free cake on his birthday anyways 🙂

I’d be completely lying if I didn’t say that every time I try a new food with Nicholas I’m totally anxious and awaiting an allergic reaction. I’m not that fun to go out to eat with because I grill the waiter on what is in every item and am really scared that Nicholas is going to grab a rogue nut somewhere. We didn’t have him tested for shellfish allergy at the time, but I’m wishing we did and probably will ask our doc to do it. Every time we eat shrimp at home, I’m paranoid about any shrimp pieces touching anything of his and basically clear everything out of the sink and I think I’ve even thrown away sponges before that I’ve used to clean up after our shrimp dinner (crazy lady over here). I’m trying to get better about being anxious about a reaction and relax a bit, but it is easier said than done. I’m sharing my crazy just in case there is another parent reading this and it makes them feel better about their own 🙂

So what’s next in our journey of dealing with these allergies? Given he was borderline on the blood test for baked eggs, we are doing a baked egg challenge in a few weeks. I had never heard of it so in case you haven’t either… basically we are going to the hospital and will feed Nicholas a muffin baked with egg and see if he has a reaction. No place better to try it I guess, fingers crossed it goes smoothly!

If you made it this far, thanks for reading my novel 🙂 I’ll keep you posted as we find out anything new and will definitely be sharing some allergy friendly recipes ideas.