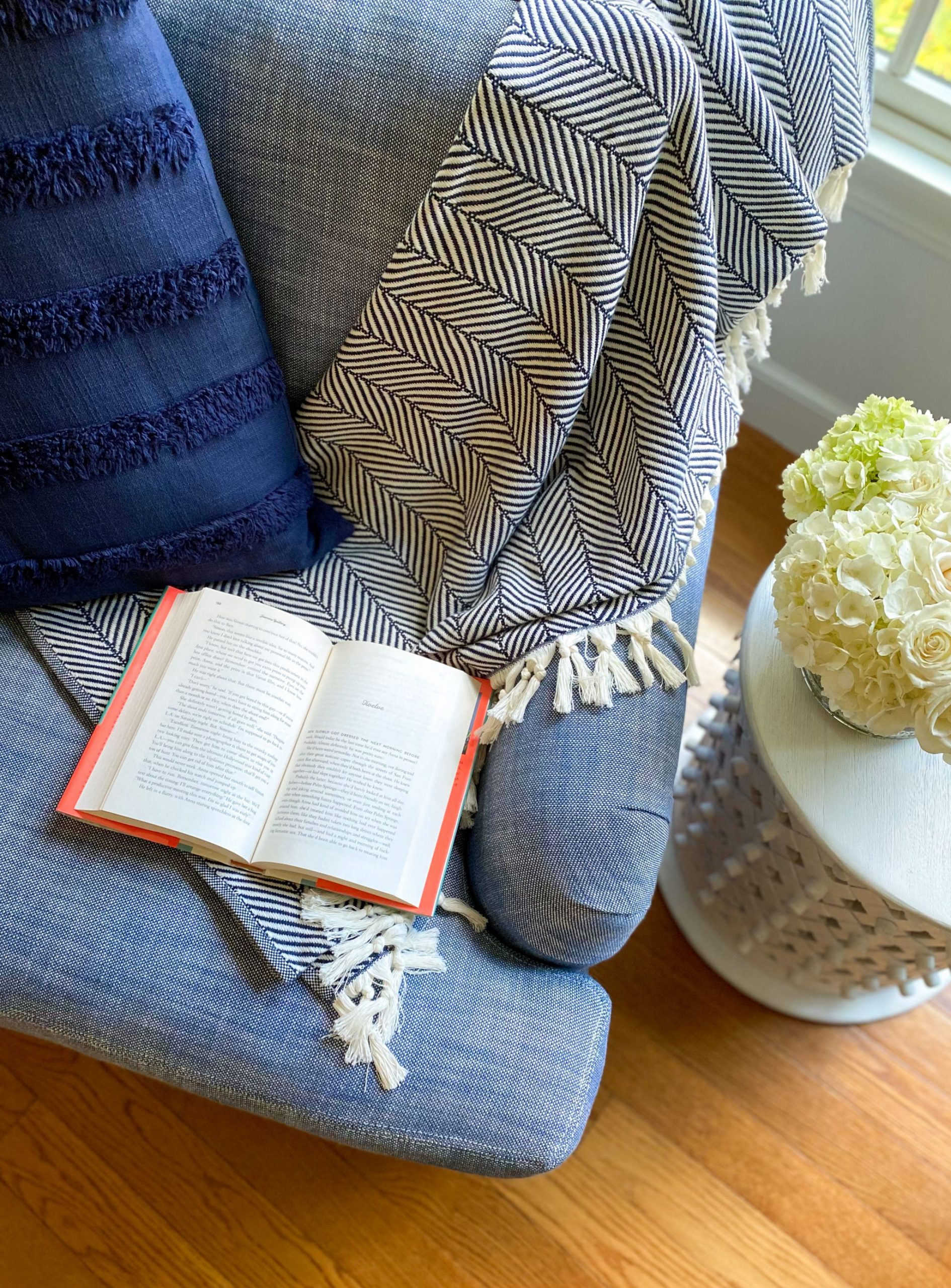 The end of summer and into fall was a great stretch of reading – and audio book listening!- for me! I feel like I have been saying this during each of my recent reading round up posts, but I would recommend all of these books for different reasons. During August I actually listened to my first audio book (late to the game I know) with Amanda Kloots’ Live Your Life. This book was super powerful and I loved discovering a new way to enjoy a book. I’ve been listening to audiobooks when I’m doing things around the house like folding laundry and it makes me actually look forward to doing these things 🙂

I love sharing what I’m reading with you because I always get such great recommendations on what to read next! In the comments, please let me know your favorite recent read. I’d also love any favorite audiobook (preferably non-fiction!) recommendations you may have!

Live Your Life: My Story of Loving and Losing Nick Cordero- I’m sure most of us are familiar with Amanda and Nick Cordero, her husband, but if you are not, Nick contracted Covid-19 early on in the pandemic and passed away. This was my first experience with an audiobook and listening to Amanda tell her and Nick’s story with her own voice was super powerful and emotional. She reflects on the many ups and downs of Nick’s battle with the long term effects of Covid as well as flashing back to how they met as two Broadway actors in New York City. This book is hard to read/listen to at points, especially hearing the raw emotion of someone who ultimately loses their husband. Obvious trigger warning for those who have lost a loved one, to Covid or not.

The Summer of Broken Rules- Oh I just loved this book! The perfect end of summer read (but honestly read it whenever it is worth it!)- Meredith is returning to her grandparents’ home on Martha’s Vineyard for the first time since her sister unexpectedly passed away. Though her family is there to celebrate her cousin’s wedding weekend, every year her family plays an annual game of Assassin during their vacation and the bride and groom have decided to play it in the week leading up to the wedding. With the game starting out with bride vs. groom families, Meredith makes a secret alliance with one of the groomsmen. Maybe I loved this book because I love Martha’s Vineyard or for the several Taylor Swift song references in it, but overall it was a cute, well written, fun read that made me smile! A perfect summer read, but really read it whenever you can because it is great!

Greenlights-My next audiobook listen, Matthew McConaughey’s Greenlights! This was fantastic! Matthew’s storytelling is absolutely amazing and I was finding any and all excuses to listen to this book. Matthew has been keeping diaries for most of his life- Greenlights is a reflection on his diaries, his experiences with acting and what he learned along the way. I loved learning more about his start as an actor and how he chose to do certain films. I was also pleasantly surprised at the book being both inspiring and motivating in addition to just telling his life story. Keep in mind I have not read the book, but listened- but the style of the book, I actually think it would be better as an audiobook, plus you get the benefit of hear it in his own voice!

Seven Days In June-Eva is the writer behind a multi-book vampire erotica franchise and a single mom with a chronic illness. Shane is an award winning novelist who avoids all press. So when Shane shows up at a Black Authors event that Eva is speaking at, the literary world is abuzz and Eva is shocked. She’s kept her week long teenage relationship with Shane a secret for all these years, but she’s always thinking about their seven days in June. Fifteen years later, they are about to have another seven days together in June after their chance meeting. Loved this romantic read!

Imposter Syndrome-Imposter Syndrome was a book I’d been looking forward to reading for a while after pre-ordering the book before it was released. It didn’t disappoint! Julia is an abandoned child in a Russian orphanage when she meets a Russian Intelligence operative and begins her career. The intelligence agency places her in Silicon Valley where over many years Julia becomes extremely successful, ultimately ending up as the COO of Tangerine, which is like a fictional Facebook-esque social networking and messaging company. After many years, the Intelligence Agency is now asking some big things of her and Julia is struggling with her dueling jobs. Alice Lu is a lower level employee at Tangerine who monitors things and notices a large data transfer being done by an anonymous user. After some investigating, she traces it back to Julia, the female COO who most other women at her company look up to. This was an excellent read, but as someone who previously worked in the tech industry, I really loved it!

Apples Never Fall-Another highly anticipated book! I was so excited to get my hands on this one at the library only a few days after it came out! I love Liane Moriarty and Apples Never Fall sucked me right in from the get go! The book centers around Stan and Joy Delaney, a newly retired couple and their four children. As the book starts, Joy is missing and the children are struggling with what to do, especially as their father was obviously the last person to see their mother after a recent argument. The kids aren’t sure what is happening, but they do know things changed in their parent’s relationship after Savannah, a young woman in need of help, arrived at their front door in the middle of the night. As the book shifts from the present day search for Joy to what happen over the last year since Savannah arrived, the family starts to see things differently. Highly recommend this book and definitely hoping for someone *cough cough Reese* to purchase the film rights!

The Other Black Girl– Nella is tired of being the only black employee at publishing house, Wagner Books so when she hears another black girl is being interviewed for an assistant position, she is thrilled! Hazel starts working at Wagner in the cubicle next to Nella’s and she is hopeful that together her and the new girl can help push for some change in the publishing world. Thinking Hazel will back her up, Nella takes a few risks with sharing her perspective as a black woman, but Hazel surprises her by doing the opposite leaving Hazel as the new office sweetheart and Nella further ostracized from her colleagues. And then the notes start arriving telling Nella to “Leave Wagner Now”. This book started a little slow for me, but once I got a few more chapters into it, I was very intrigued and very surprised by the ending. I’ve seen a few reviews/recaps of this book describing it as The Devil Wears Prada meets Get Out and I think that is a great way to describe it!

Golden Girl– Early one summer morning, Vivian Howe, mother to three kids and author of thirteen books based on her home island of Nantucket, goes out for a run and is killed by a hit-and-run driver steps from her home. As Vivi dies, she meets Martha, her handler, who helps her ascend to heaven and tells her she can have until the end of  summer to watch what is happening on earth. Martha also grants Vivi three nudges where she can “nudge” her loved ones in a different direction while watching. With her three children reeling from her death and their own personal struggles, Vivi is weighing how to use the nudges very carefully. She also is eager to watch the release of her latest novel called Golden Girl which is based off her own life and a secret from her teenage years that only her former high school boyfriend knows. While I really liked this book, I should mention it was hard to read as a mom thinking about your kids struggling after your death which also may have been exacerbated by the fact that I was traveling and away from my kids :). There definitely were moments though where I choked up reading this and while reading it on a plane, I definitely had to hold back sobbing a few times.

While We Were Dating– I seriously love Jasmine Guillory’s books. I’ve shared them in the past and you should definitely go into it knowing they are romances and can be pretty steamy. While We Were Dating is her most recent book and follows Ben, an advertising exec and Anna, a movie star. When Ben lands an advertising campaign starring Anna, he’s super excited because she is gorgeous. And since their first meeting Anna has thought Ben was cute and couldn’t resist flirting a little bit with the ad exec. After a family emergency, their flirtation turns into a bit more. If you read and liked any of Jasmine’s other books, this is another great, quick, romantic read that you’ll love too!

Vanderbilt: The Rise and Fall of an American Dynasty– I listened to this book Vanderbilt, quite obviously, tells the story of the Vanderbilt family, how Cornelius Vanderbilt became the richest man in America and how his children, their children and their children lived off this money and family reputation for years to come. If you live in New England and have ever visited the mansions in Newport, you’d likely find this a fascinating read or listen. I didn’t know much about the inner workings of the Vanderbilt family and their quest for money and to be considered members of high society was extremely juicy full of family dramas and tales of lavish parties. Written and narrated by Anderson Cooper, who if you didn’t know is the great-great-great grandson of Cornelius Vanderbilt himself, this book was very entertaining while also being very informative.

Have you read any of these books? Would love to hear your thoughts in the comments!