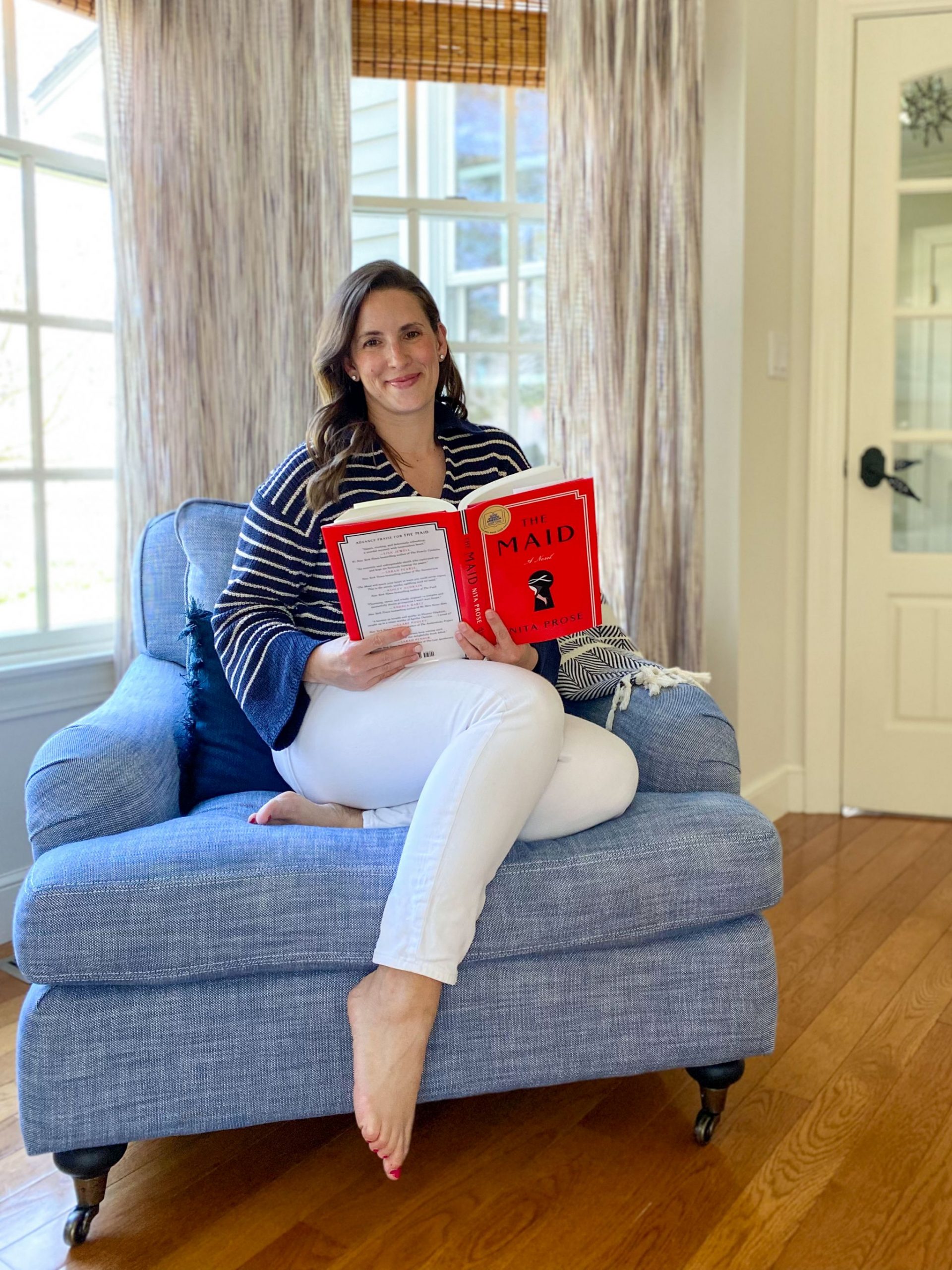 Back with a few more months of mini-book reviews with everything I read in February, March and April 🙂 I read seven books these last few months, but a few stood out as favorites. First was The Maid- I think Grace Atwood called it a heartwarming mystery and this is such a good way to describe it! Definitely add it to your TBR list if you haven’t already! My other favorite was Eight Hundred Grapes which is actually 7 years old, but I loved it! Most of you have probably read it, but if not, add it to your list. Sometimes I get wrapped up in having to read new things I don’t go back to older books I missed, but reading this book and loving it so much proved to me that I should do that more! An honorable mention also goes to Flying Solo, the new release from Linda Holmes who wrote one of my favorites’ Evie Drake Starts Over. This is a great summer reading book when it comes out in June.

What have been some of your favorite reads recently? Have you read any of these books as well? Would love to hear your book recommendations and thoughts on these books too!

A Lot Like Adios– I was very excited to read this new romance from Alexis Daria who wrote You Had Me At Hola. A Lot Like Adios is the story of Michelle (Jasmine’s cousin from You Had Me At Hola) and Gabe. Michelle is a free lance marketing professional when she receives a request to work with a new, up and coming gym opening in New York. The gym is being opened by none other than Gabe, her former high school best friend and the guy she’s been wondering about for the past decade. Gabe can’t believe his gym co-owner and partner selected Michelle to do the marketing for their new NY venture, but it gives him a reason to reconnect with her after all these years. This is a steamy romance- so just know that is the kind of thing you are getting yourself into with this book 🙂 Personally I preferred You Had Me At Hola and would suggest that first if you haven’t read it yet, but this was also a great romantic read.

Ghosts– Nina decides to go on a dating app and the impossible happens, on her very first date she meets Max who she instantly falls for. Nina and Max start dating and it all seems to be going swimmingly, maybe even a little fast with them spending most of their time together. So when Max ghosts Nina (expected from the title), she is shocked. Not only was she ghosted, but Nina is also coming to terms with some big family, professional and personal life changes. While I did spend a good portion of the book mad at at least one of the characters, I think this book was a good read and as someone not in the dating world currently it gave me a better perspective of things for friends that are dating. There also is a friendship Nina has with an old friend who is married with a kid and it made me reflect on some things personally and how I could be a better friend in some instances.

The Maid- I’m really torn between this book and the next in this list being my favorite from these last few months of reading, so I’ll just say this is my favorite new release to avoid having to pick 😊 The Maid was described by Grace Atwood, who I get a lot of book recs from, as a heartwarming mystery- not sure I’ve ever heard those two words put together before, but it is how I would describe it. Molly is a very quirky woman who is a maid at a luxury New York City hotel. When she finds a VIP guest dead in his suite as she is cleaning, she becomes the center of a murder investigation. Along the way, Molly makes friends and stays true to herself while working to clear her name. If you loved Eleanor Oliphant, I’d definitely recommend reading The Maid!

Eight Hundred Grapes– I loved Eight Hundred Grapes and I felt so silly that I hadn’t read it yet after reading because it was great! This is an older book as it was published in 2015, but for whatever reason I never read it. The novel starts with Georgia returning home to her family’s Sonoma vineyard after a fight with her fiancé that has her second guessing their upcoming (in a week!) wedding. When she returns home, nothing is as she expected as her mom has a boyfriend, her dad seems okay with it and her two brothers are fighting. The book focuses on her relationship with her brothers, parents and fiancé all while she is trying to figure out what is most important to her.

Lucky– This was the first book for my new book club with friends in town and it was a non-controversial book club read, but honestly it wasn’t overly great. Lucky grew up with her con-artist date who was constantly running scams to make money and get by. The book opens with Lucky in Las Vegas with her boyfriend and they are planning to get away to a deserted island the next day. When the day to leave comes, she wakes up to Cary gone and all the money, passports gone too. Lucky immediately goes in to survival mood and goes on the run to try to figure out what happened and learn more about herself. While the book held my interest because I wanted to see what happened next, I wasn’t super sympathetic to Lucky as a character.

Flying Solo– I was excited to receive an advance copy of Linda Holmes’ upcoming book as I loved Evie Drake Starts Over so much! After her beloved aunt passes away, Laurie volunteers to clean out her home back in her hometown in coastal Maine. While cleaning out her aunt’s home, Laurie finds a carved wooden duck that seems like it was hidden, but no one knows what it means. Laurie is convinced to give the duck away against her better judgement and thus begins an adventure of trying to get the duck back and figuring out what it meant to her aunt. Besides the duck story line, Laurie is trying to find herself and understand what she wants from her life as a almost 40 year old woman who wants to live life on her own terms. I really liked how Linda Holmes shared an unconventional romance in the story too! Flying Solo will be released on June 14th, but you can pre-order now!

Summer Island– This is another book I received an advance copy of, but it was released this week so now available for your summer reading pleasure 🙂 When Phoebe loses her job and her fiancee on the same day, she doesn’t expect her mom to tell her that her dad left her when she calls to be comforted… but this is what happens. Phoebe and her mom, Ruth decide to get away for the weekend to Summer Island, a New England island, where Grandma Alice lives. Their weekend long trip extends as Phoebe and Ruth find out more about themselves and what they want on Summer Island. In my opinion this was a solid summer time read- it took a little time for me to get into, but once I was about a third of the way in I was wanting to find out what happened to each of the very likeable characters in this book.

Will you be adding any of these books to your to be read pile now?