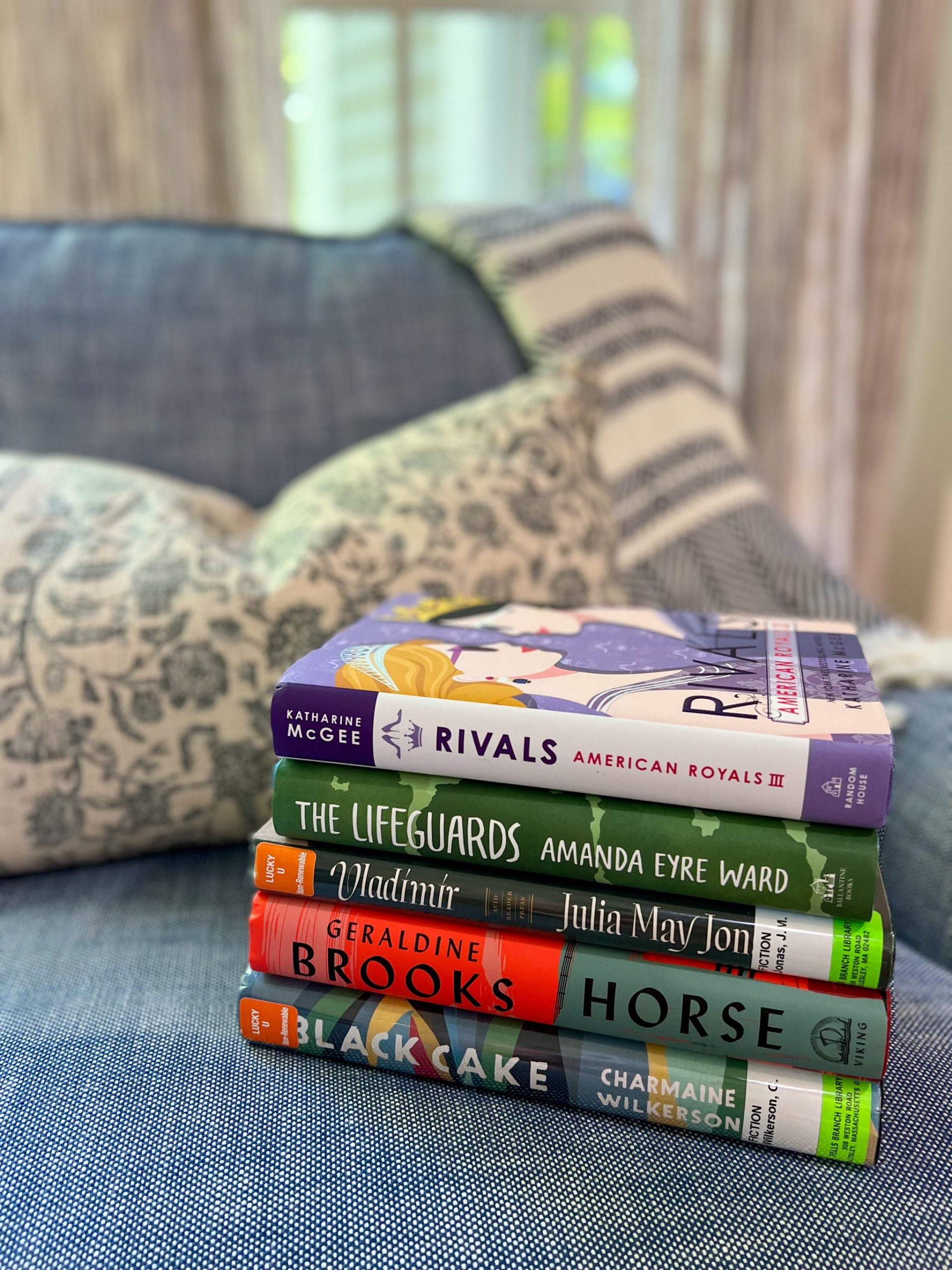 A veryyyy overdue blog post about my most recent reads so gear up for a long one! I’ve been sharing what I’m reading as I go on Instagram (so be sure to follow me there if you don’t already 😉 ), but I love having these posts to go back to if someone asks me for a recommendation or even to remember what I’ve read this year. I should probably start a Good Reads too- do any of you use that?

This summer was a good one for reading especially the month of August. This past month I read two of my favorite books all year- Horse and Black Cake- that I can’t stop recommending. What was your favorite read of the summer? I’d love to hear about it!

People We Meet On Vacation– I love Emily Henry’s books (two on this list) and this is a great summertime read that follows Poppy and Alex, two best friends who have been going on a summer trip every year since they met in college. It’s a best friend turned love interest story with the story happening in present day referencing something that happened in the past that cause them to fall out of touch before reuniting as just friends.

One Italian Summer– When I saw this book from author Rebecca Serle who wrote the book In Five Years being talked about before its release, I was so excited as it takes place in Positano at the hotel that MJD and I stayed at on our honeymoon! I knew I wanted to read it because of that and also because I loved In Five Years. One Italian Summer follows Katy to the Amalfi Coast, on a trip she was supposed to take with her mother who spent time there before she had Katy. Carol, her mom, unfortunately passed away just before their mother daughter trip. While she is there, she meets an amazing woman, Carol… Carol who is her mom, but not, it is her mom when she was just 30 years old before she had Katy. Katy realizes this is an amazing opportunity to get to know her mom in a completely different way, but doesn’t know how long this fantasy will last. If you read Rebecca Serle’s In Five Years, you can understand how she weaves in fantastical things in a realistic way and this book was exactly that!

Book Lovers– Emily Henry again! Nora Stephens is an amazing literary agent who agrees to go on a trip with her sister to a very rural Sunshine Falls, North Carolina (the setting of their favorite book) after her sister begs for a girls trip before her third baby is born. While there, Nora who is NYC through and through is tasked by her sister to complete a small town bucket list. One thing not on the bucket list was running into Charlie Lastra, an editor Nora knows from NY who she has had some bad encounters with in the past. She tries to avoid him, but they keep seeing each other around town. I’m sure you can guess where the book goes, but it was such a great read that I loved!

Cover Story– For those of you who were interested in the Anna Delvey story, pick up this book next! The book follows Lora, an aspiring writer and NYU student who meets Cat Wolff, a heiress living at The Plaza during her internship at Elle. When Lora shares her financial struggles and school concerns with Cat, the heiress suggests working for her as her ghost writer. The novel is told through Lora’s diary entries, FBI e-mails and chats (because this heiress isn’t what she seems), letters, Instagram posts and more- I feel like the style of writing also made it fly by even more.

Mean Baby– Selma Blair’s autobiography was equal parts amazing, inspiring, heartbreaking and joyful. I loved listening to Selma tell her story herself in the audiobook version. Selma’s story includes her struggles with alcoholism, depression, her physical struggles with MS, her career as an actress, many beautiful friendships, complicated family dynamics and her favorite job of all, being a mom to her son. I laughed and cried and loved this book!

Every Summer After-I feel like this book was all over bookstagram so I had to give it a try for myself and I was not disappointed at all! Going back and forth between a current weekend and six summers from their teenage years, Every Summer After is the story of Percy and Sam who met as neighbors when Percy’s parents bought a lake house next to Sam’s family. Every summer Percy would spend all her time with Sam and eventually things moved from friends to boyfriend and girlfriend. But as the reader you know something happened because Percy and Sam now haven’t seen each other for ten years and Percy still thinks about what went wrong. As Percy heads back to the lake after learning the unexpected news that Sam’s mom passed away, she’s struggling with her feelings after all this time. Fluctuating between the weekend of his mom’s funeral and the six summers growing up, Every Summer After was an adorable love story with all the feels.

The Hotel Nantucket- Is it even summer without reading an Elin Hildebrand book? Hotel Nantucket is her latest and another great beach read from Elin. Lizbet Keaton is looking for a fresh start after her boyfriend and business partner was cheating on her- so she takes a chance as the general manager for the new Hotel Nantucket. It is a big chance as the Hotel Nantucket is completely new, a renovation of an old, abandoned and possibly haunted hotel- with an owner that lives in the UK and is overseeing everything remotely. Besides Lizbet, the hotel is full of a cast of characters who each get a turn with the action as chapters go between each character’s point of view. Oh and did I mention the ghost? With a page from her book Golden Girl, Elin is bringing a ghost in as a main character again in Grace, a chambermaid from the former hotel who was killed in a fire in the 1920s. Because of all the characters, it did take me a little bit of time to get into this book, but once I did I was hooked and wanted to stay up late reading. I still like some other Elin books better (Summer of 69 is my favorite), but this is a great beach read for sure!

The Lifeguards– Whitney, Annette and Liza have been best friends in their Austin neighborhood since their boys were babies. One night while the moms are having happy hour, the boys arrive home after a dip in the local watering hole shocked by what they saw. The moms go into overdrive trying to protect their own, both together and then individually. This was a little bit mystery, a little bit family dynamic drama and it had me trying to figure out what happened until the end.

Horse– I really need to shout this one from the roof tops because I feel like I want this book to get more press- read Horse NOW! I loved this book! Told between 1850s Civil War era Kentucky, present day Washington D.C. and the 1950s Manhattan art scene, Horse is a beautifully written historical fiction novel with so much relevance to today. Theo is a Nigerian-American art historian who is researching a painting he found in his neighbor’s junk pile featuring a horse and a Black horsemen. Jess is a Smithsonian scientist who happens to be researching that same horse’s skeleton after a request from another museum for the famous racehorse Lexington’s skeleton. Flashing back 150 years is the story of Jarret, an enslaved boy, who is with the horse as he is born and remains with him through his racing years and the history of the South during the civil war. Martha Jackson is a gallery owner who is friends with artists like Jackson Pollack, but becomes obsessed with an equestrian painting depicting the great Lexington. Geraldine Brooks weaves these stories together to make one amazing novel that I cannot recommend enough!

Vladimir- I feel a little bit bad because Vladimir was the book I read directly after Horse which I loved so much so I kind of had a bit of a book hangover. A popular, middle age female English professor at a liberal arts college is suddenly thrown into controversy when her husband, also a professor and department head at the college, is investigated for sexual relationships with his students. As she is dealing with struggles within her marriage and her professional life, the narrator begins lusting obsessively over Vladimir, a younger, new professor on campus.

Rivals: American Royals III– I love Katharine McGee’s American Royals series and got the chance to read the latest this past month! The third book in the series that imagines what the US would be like if George Washington had been king of America and his family’s continued reign. The book picks up with Beatrice as queen and hosting the greatest convocation of kings and queens from around the world. Former rivals Daphne and Nina decide to team up against another shared enemy. If you haven’t read this series yet, I’d definitely recommend giving it a try!

Black Cake– This book was unbelievable- another one I will be recommending to everyone like Horse! Benny and Byron are estranged siblings who reunite after several years when their mother passes away. Their mother left them with two things upon her passing- an eight hour recording that she is requiring them to listen to together and a black cake, the traditional Caribbean dessert that their mother made for special occasions. As they listen to the recording, they start hearing the story of Covey, a headstrong girl and many secrets come out about their family. I have a feeling this will continue to be one of my favorite books of the year- it is so good!

Have you read any of these books? Which one were your favorite?